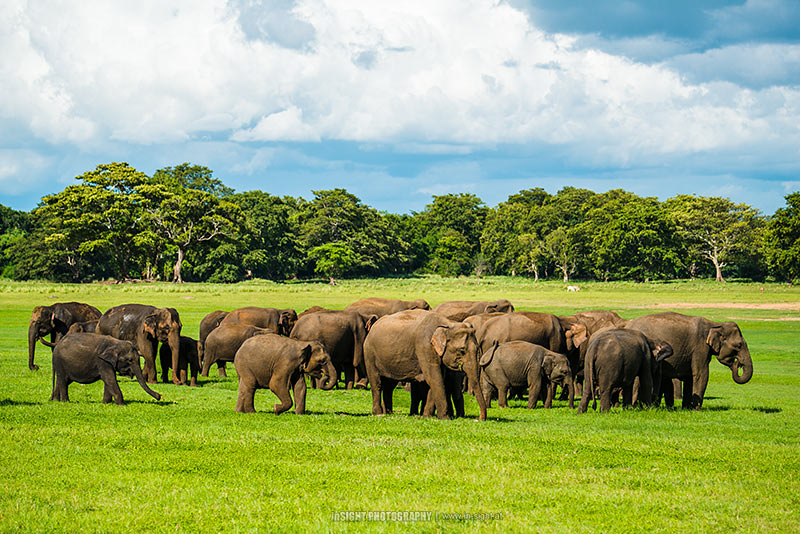 Sri Lanka is a beautiful country and due to its tropical location, offers a great variety of animals and plants. When we first read about the country’s flora and fauna, it was a must-see to visit several National Parks. Our aim was to see leopards, elephants and crocodiles.

The first park we have visited was Wilpattu National Park, which was a stop over during our journey from Negombo, in the North of Colombo to Anuradhapura, the capital city of North Central Province, Sri Lanka. It took us around 5 hours to reach the national park as streets are not that good as we are used to and we arrived there in the late afternoon.

Wilpattu National Park is best known for its sights of leopards, sloths and birds as well as elephants and we would have been delighted to see leopards – but we didn’t. When entering the park the sky was casted with dark clouds and we weren’t aware of an upcoming thunderstorm. So we entered the park without a doubt of seeing all these animals the Wilpattu National Park is famouse for. After 45 minutes of driving over rough roads through woods and stepps where we photographed various birds, it started to rain lightly but continued raining havily after a short time when the thunderstorm was close. Trees were disrooted and felt down on the roud in front and behind of us. In the end the tour was aborted and we were driven back to our driver where we arrived completely wet. Although the weather and animal sights were not as expected, it was a great adventure for us.

Minneriya National Park is located near the Captial City of Northern Central Province, Anuradhapura. We arrived in Anuradhapura late in the evening coming from Wilpattu National Park and stayed two nights. We have visited this park on our second day in Anuradhapura. As everything pointed for upcoming rain and thunderstorm, our driver Mariyan adviced us to immediately depart for the park. Our safari guide, a friend of Mariyan promised us not to charge us for the trip in case of thunderstorm and rain. So we arrived there at around 1pm and were not sure if we would see elephant as expected. But we did, and there were a lot of them!

It is absolutely breathtaking seeing elephants living in freedom. You can see in their eyes how they feel. For three times, when we got way too close to the herd of elephants we were attacked by large bulls. They are very impressive and especially at the first attack, the elephant suddenly started running towards to our jeep and came so close so that I could have touched him – without a doubt. Our pulse was very high at the moment of this attack and we felt adrenalin all over. But the safari guide was able to escape by driving away very fast. The following two attacks were as well adventurous which won’t be forgotten any more.
When heading back to the entrance after around five hours of enjoying the beauty of the national park with many birds and great landscape, it started to rain heavily again. But this time we kept almost dry.

The following images represent our impressions from the variety of both national parks. 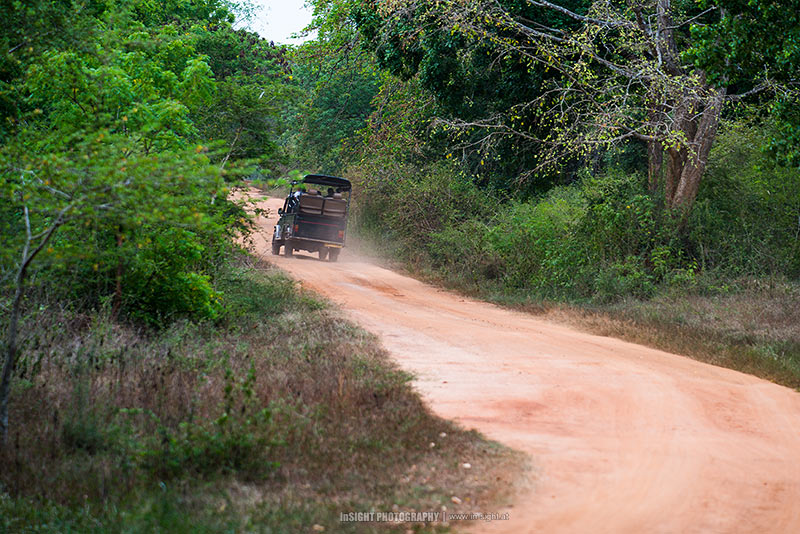 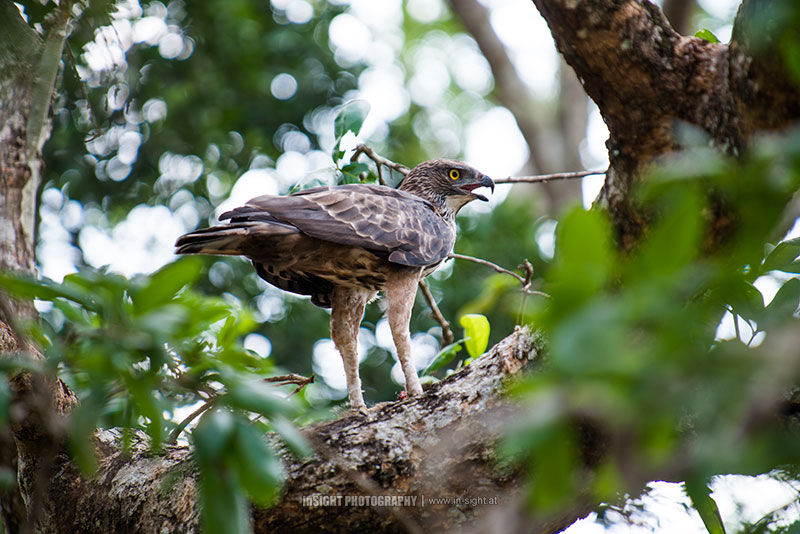 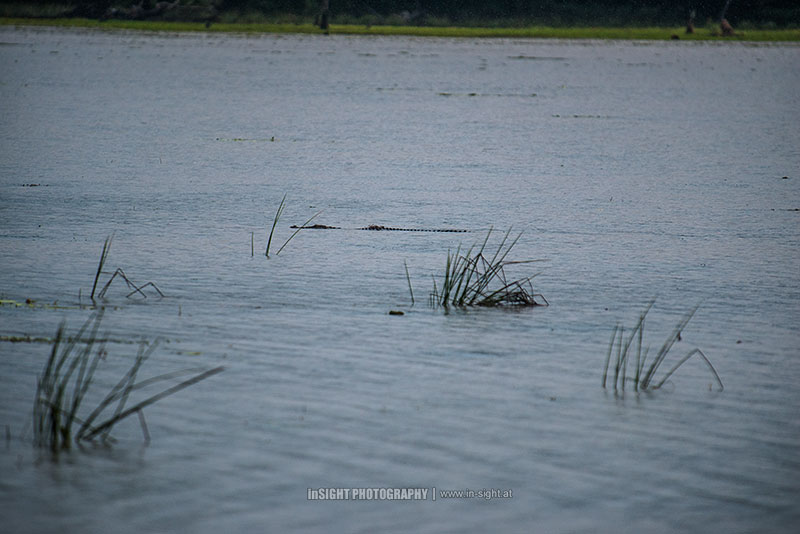 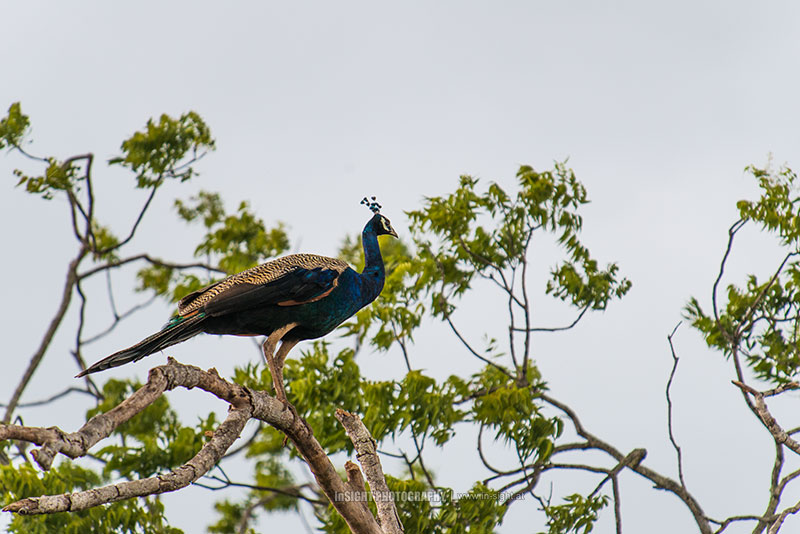 A Peacock sitting on a tree in Wilpattu National Park, Sri lanka 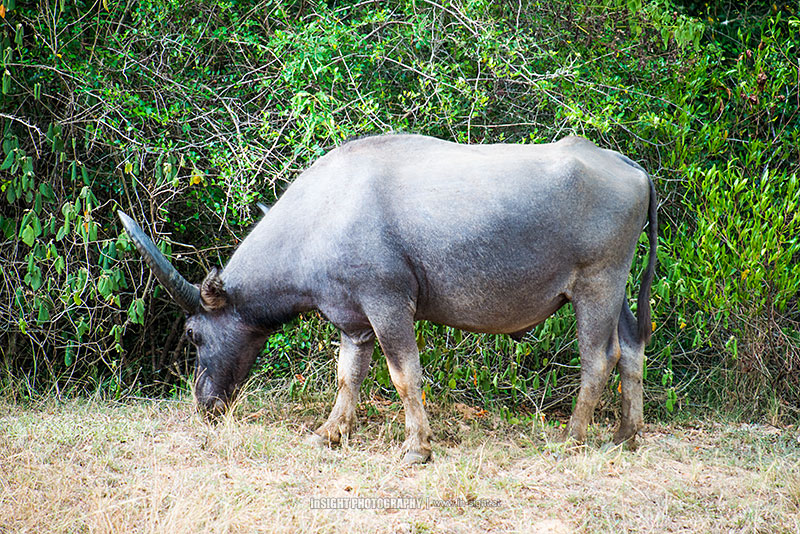 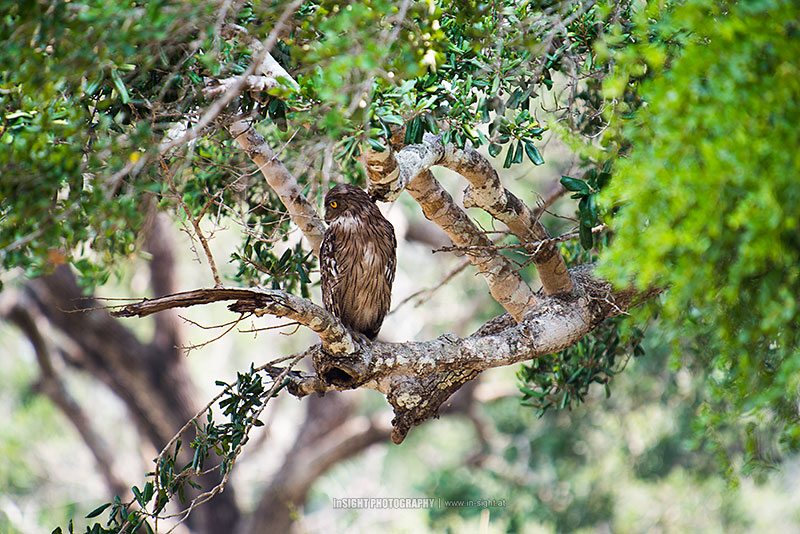 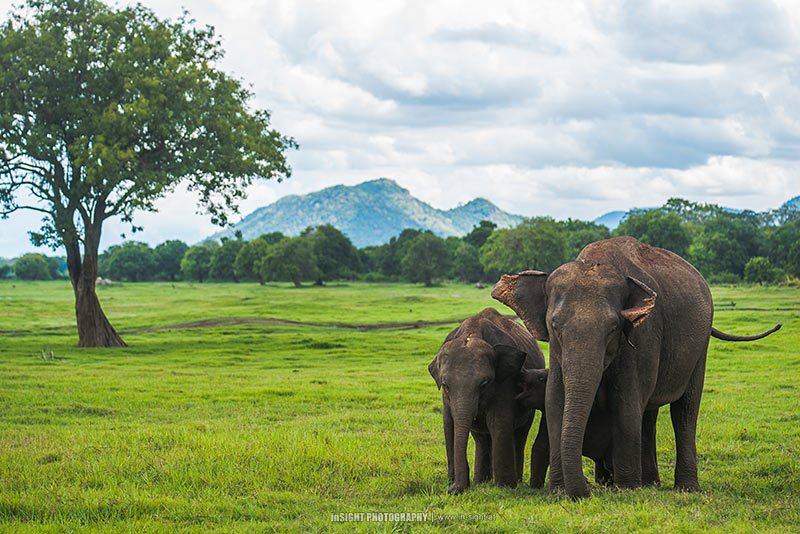 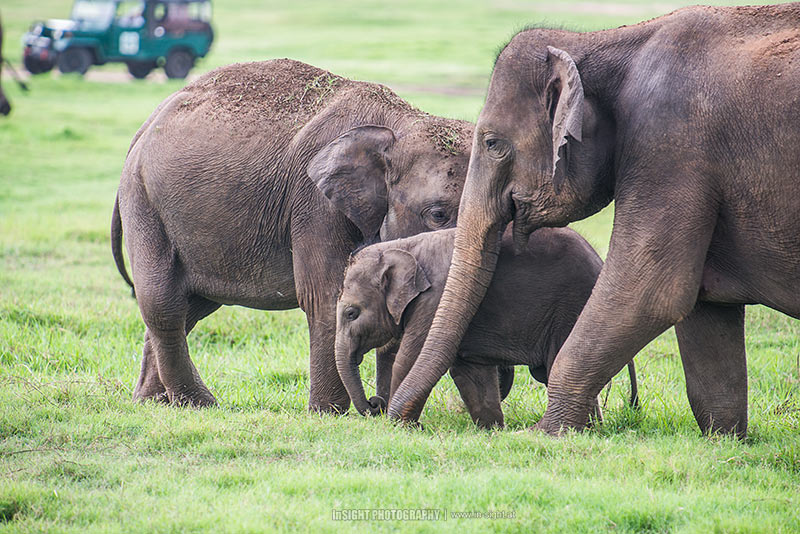 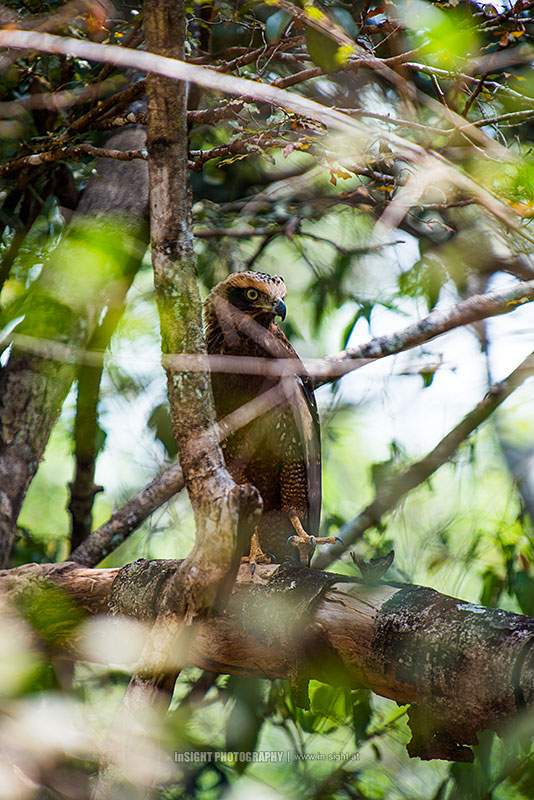 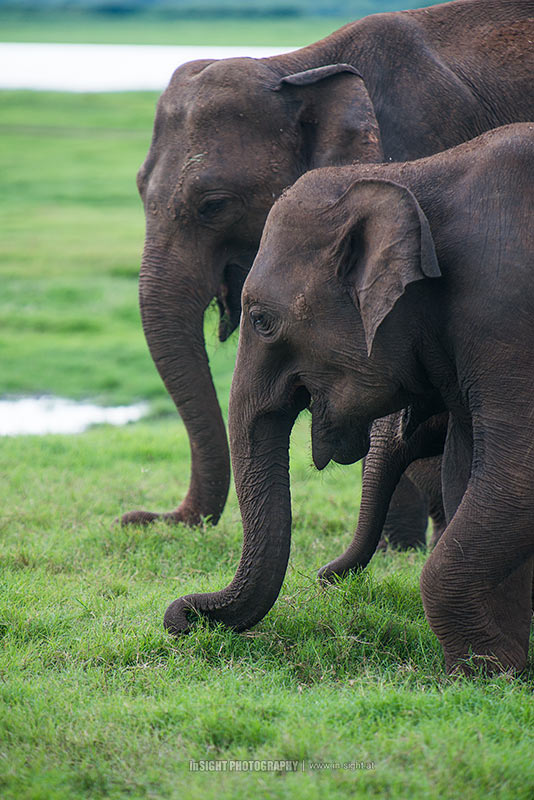 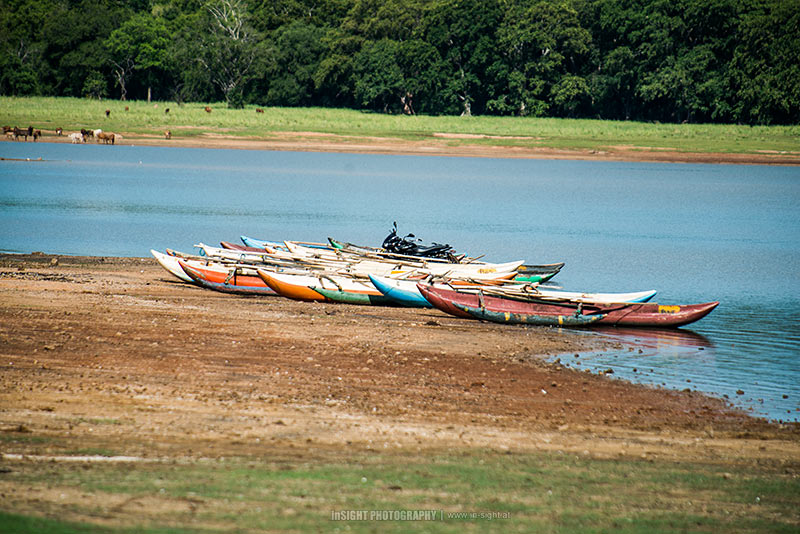 With the help of the boats in the front one can imagine how close residents are to wild animals in Minneriya National Park. This might be a reason for the elephant attacks to humans in Sri Lanka. 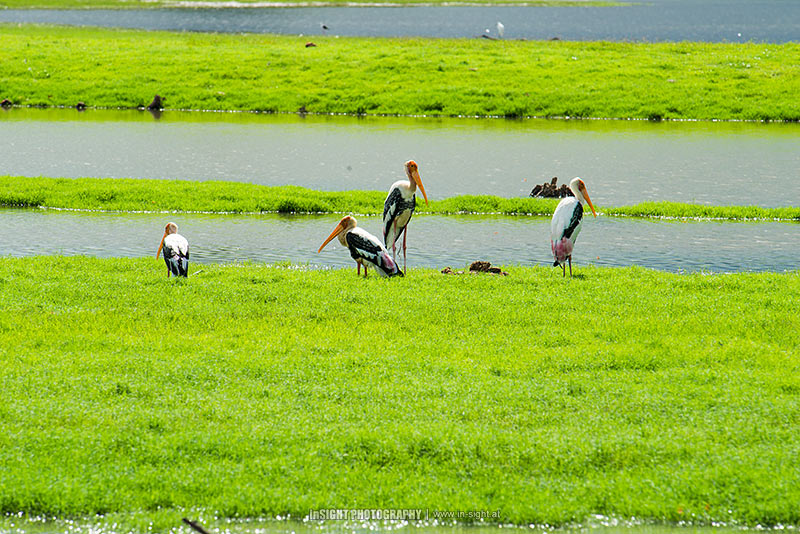 On our trip through Sri Lanka we were guided by Mariyan Fernando, a local tour guid living in Negombo, Sri Lanka. We learned to know him on our first day in Sri Lanka and asked him to guide us through his home country for ten days. And it was the best choice: He did everything for us, booked accommodation, guided us perfectly through ancient towns and temples and introduced us to his culture and local food. We highly recommend him as a guide and a driver so in case you are planning a trip to Sri Lanka in future, you can contact him as follows: